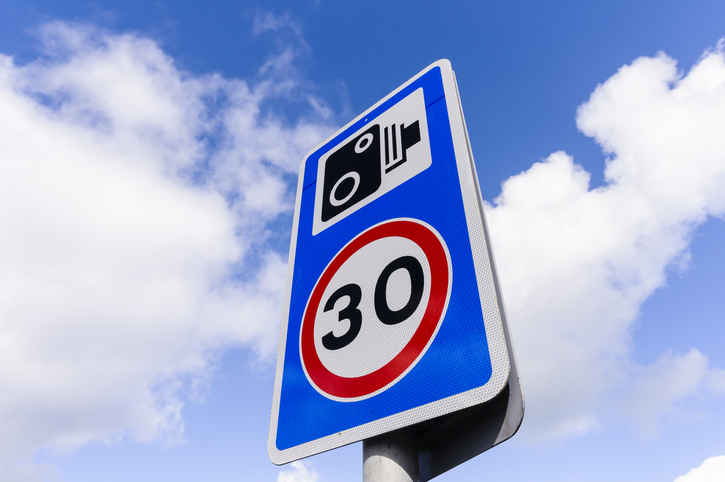 All about speeding offences

Speeding is the most common driving offence in England and Wales, with an offence recorded against one in 10 drivers in the last year.

So what are the consequences of exceeding the speed limit? What can you do to make sure you don’t fall foul of the law? And how could black box insurance help you to drive down the cost of your premiums?

First, let’s start with a quick refresher – we all know about speed limits to pass the theory and practical parts of the driving test, but it’s surprising how quickly all that detailed knowledge can fade once you have your licence.

Speed limits in the UK are a maximum, not an instruction. Drivers are expected to use their common sense to decide on a safe speed given all the circumstances such as weather, traffic and road conditions at the time. The safe speed could be much lower than the maximum shown on the signs. Mandatory speed limits are given on circular signs in black numerals on a white background with a red border.

A national speed limit sign (circular white sign with a black diagonal line) indicates that cars can travel 70mph on a motorway or dual carriageway, or 60mph on a single carriageway. Many smart motorways have variable speed limits using electronic signs to help control traffic flow, so keep a careful eye out if you’re driving on one of these.

If you can’t see a speed limit sign, you can usually work out an appropriate speed from the surroundings. Many built-up areas have a 20mph or 30mph limit, whereas more open roads are likely to be 30mph or 40mph. One easy way to tell is by looking for street lights. These often indicate a 30mph limit unless there are signs saying otherwise. Different speed limits apply to different vehicles, or to cars if you are towing a caravan or trailer.

A nation of speeders

Unfortunately, speeding is all too common. A survey of 1,500 UK motorists found that 15% admit they drive ‘far too quickly’. The pandemic has made the situation worse, as government data shows the number of speeding drivers increased 7% during the first COVID-19 lockdown. Drivers also admitted to feeling less confident about their driving skills after an extended period off the road.

Why does speed matter?

You might question why speed limits exist at all. For example, much of Germany’s Autobahn network has no speed limit and cars regularly exceed 90mph, perfectly legally. The simple reason is safety. The speed of a vehicle is all-important in determining whether it can stop in time to avoid a collision, or if injury or fatalities result from any collision.

Speed is a contributory factor in one in three fatal road crashes in the UK according to road safety charity Brake. This might mean the vehicle was going beyond the maximum speed limit, or that it was going too fast for the prevailing conditions at the time.

Even a small reduction in speed can result in a very significant difference in a collision. For example, a vehicle travelling at 20mph would be able to stop within three car lengths if a child stepped out in the road ahead, avoiding a collision. If the vehicle was travelling at 25mph, the child would be hit at a speed of 18mph, the equivalent of falling from a first-floor window. At 30mph the impact speed would be 27mph and a fall equivalent to a 3rd floor window. At 38mph, the impact after three car lengths would be 37mph and the equivalent to falling from the fifth floor of a building.

A pedestrian hit at 30mph has a one in five chance of being killed, while the impact of a crash at 30mph carries twice the energy of an impact at 20mph.

It’s worth knowing a little about how speed limits are enforced. For example, many 20mph zones rely on the speed limit enforcing itself rather than police enforcement; if the car in front of you is travelling at 20mph, you have to travel at that speed, too.

Enforcement of speed limits differs depending on your speed. The National Police Chiefs Council guidelines indicate that drivers should be permitted a little leeway (usually 10% over the speed limit plus 2mph). If you exceed the speed limit by a significant amount, you may be taken to court.

Speeding offences may be dealt with by a speed awareness course, a fine or a summons to court, which could mean a criminal conviction and more serious sentence. Police have discretion about how to apply the guidelines; they might be more or less lenient depending on the circumstances.

What are the penalties for speeding?

As shown in the table above, speeding offences may be dealt with by a fixed penalty notice, a speed awareness course or a court summons. It is also possible that a speeding driver may be stopped by the police and given a verbal warning rather than any official sanction. If this happens to you, consider yourself lucky! Let’s look at the most common penalties in turn.

A fixed penalty notice could be sent to you after being caught by a speed camera or if you are stopped by the police. You will be required to pay a £100 fine and have three points endorsed on your licence, which remain for four years. Having points on your licence will increase the cost of your car insurance as insurers will see you as a risky driver. If you accrue 12 penalty points on your licence over a three year period you may be disqualified from driving for 6 months or longer.

It is possible to plead not guilty to a fixed penalty notice, in which case the matter is referred to a court. If the court finds you guilty, you can be fined more and given more penalty points than apply under the fixed penalty scheme. You may also have your licence suspended or be given a driving disqualification. If you passed your test within the previous two years, your driving licence will be revoked if you incur more than six points, and you will be required to retake the driving test.

If you receive a court summons or Notice of Intended Prosecution (NIP) for speeding, this is an indication that you have committed a more serious motoring offence. You must respond to the NIP within 28 days, otherwise you could be given a fine of up to £1,000 and six points on your licence.

You may wish to appoint a solicitor to represent you in court and advise you on dealing with the charges against you. Penalties for speeding offences are subject to sentencing guidelines that divide offences into three classes. Fines are up to a maximum of £1,000 or £2,500 for a motorway offence.

Some aggravating features will make your sentence more severe. These include excess speed in bad weather conditions, near schools or in areas with lots of pedestrians or heavy traffic; if you were carrying passengers and if you were driving a lorry, bus or taxi or otherwise driving as part of your employment.

How can you avoid speeding?

Creeping over the speed limit only takes a small lapse in concentration. Here’s how to cut your chance of breaking the law:

How can black box insurance help me drive more carefully?

According to statistics, young drivers are more likely to speed because they underestimate the risks associated with speeding. Young men are particularly likely to be involved in a collision in their first few years of driving, particularly if driving at night or with passengers of their own age.

The higher risk profile of young drivers means that insurers charge this category of motorists more for their insurance. However, black box insurance can help you to bring down the cost of your car insurance by demonstrating your credentials as a careful, responsible driver.

Black box insurance works using a device which is fitted to your vehicle, recording key data such as your speed, rate of acceleration and braking, steering and the times of day when you drive. The data is shared with your insurer and you can also see for yourself using a smartphone app. This can give you useful insights into your speeding habits, helping you become a better driver and potentially save yourself some money, too.

Get in touch with the team at Smartdriverclub today for a quote.

Policy benefits, features and discounts offered may very between insurance schemes or cover selected and are subject to underwriting criteria. Information contained within this article is accurate at the time of publishing but may be subject to change.

Should you buy an electric car?

With the UK ban on the sale of new petrol and diesel cars being moved forward to 2030, many car owners are weighing up the benefits of investing in an electric car sooner rather than later.